The Queen Victoria arrives in position by 8 AM and two pilots come onboard to steer the ship through the Gatun Locks. This is the only location in the world that requires a ship to use local pilots to actually take control of and steer the ship. Our ship is almost at the maximum size – width and length – known as Panamax class, which will fit into the canal. We literally have two inches on each side. Even though we have been through the Panama Canal before, it is always amazing to learn about how it was built and how everything still operates efficiently after over 100 years in operation. A man who grew up here and was in charge of the port is onboard to explain everything. 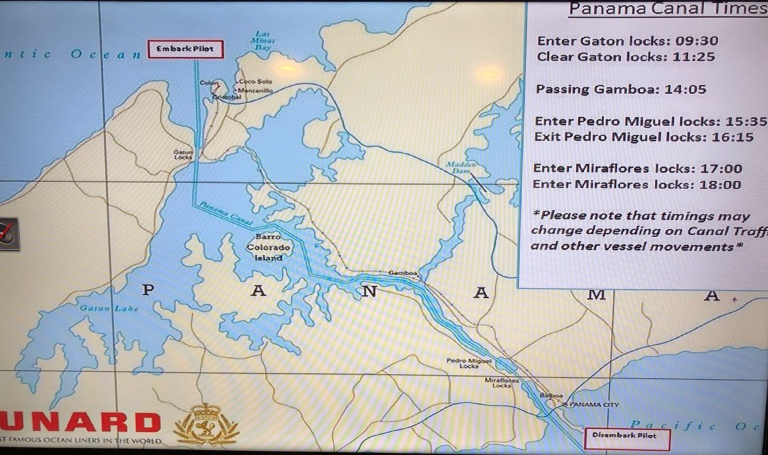 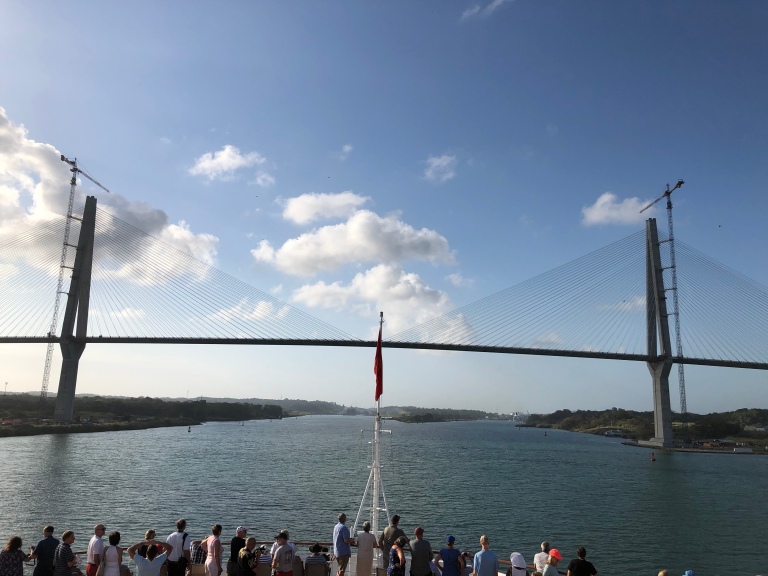 We found a good spot to observe on the forward 6th floor deck. As the ship approaches, we see a new bridge which we are told will be completed later this year. It is the first of several new bridges planned to cross the canal. The pilots are on board so we proceed under the bridge and into position for our turn through the locks. As we approach, we can see the new canal’s locks (Aqua Clara) with a large ship coming through. This section just opened in 2016. It is for ships too large for the old canal locks; they are called Neo-Panamax ships. 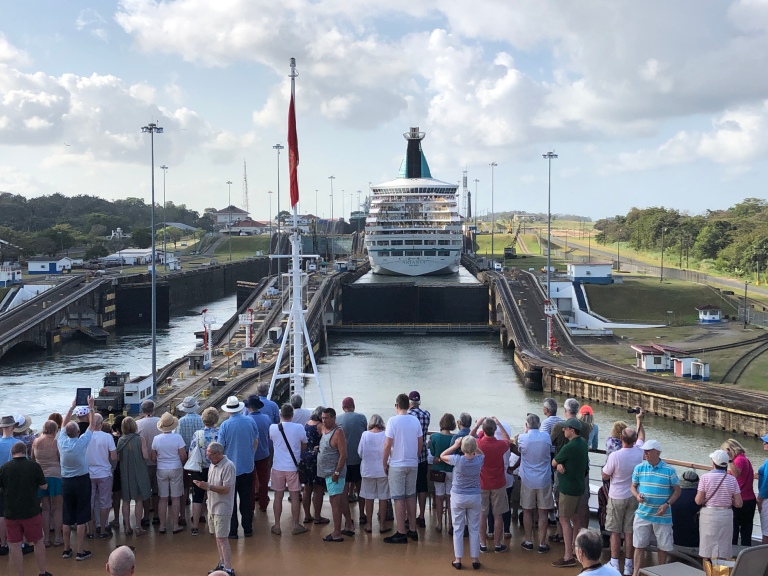 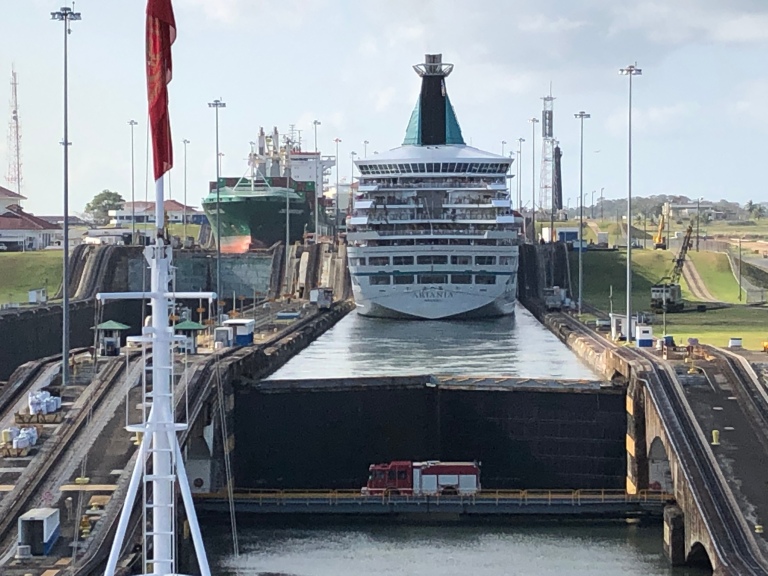 We enter the first of the three Gatun locks around 9 AM, following another cruise ship. The current road crosses on a swing bridge in front of the first lock gates and a fire truck is going across – photo op. It’s quite warm up on the deck so we watch ‘live’ outside until we enter the first lock. It takes almost 2 hours to get through the Gatun locks and into Gatun Lake. Gatun Lake is created by an earthen dam, one of the largest, across the Chagres River. Over 135 inches of rain falls in the mountains so no worries, the water will always be there to run the Panama Canal lock system. It will take over 3 hours to cross the lake. We also have a delay because there is an LNG ship coming through (natural gas) the Panama Canal and all ships make way for this dangerous cargo to go through the narrowest part of the canal, the Culebra Cut. 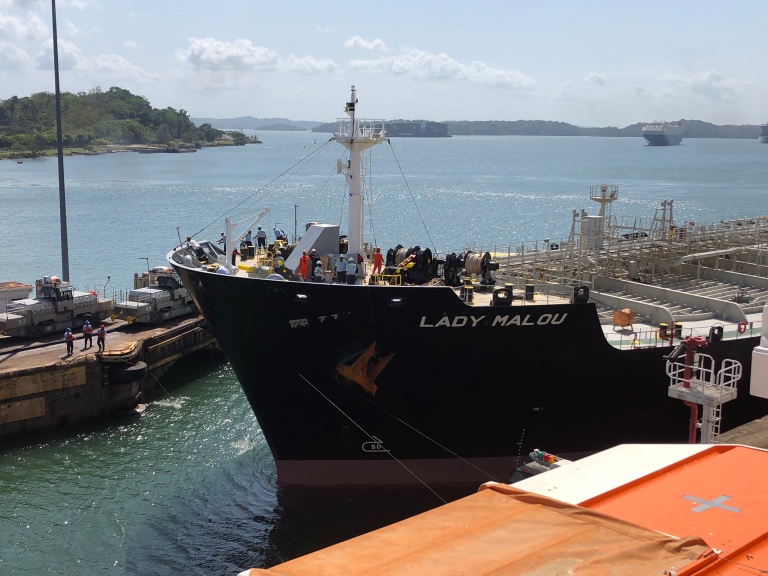 Now back in the room, cooling off and we can watch the rest on the TV or somewhere where it is air conditioned!

The narrator has been telling stories all day and one of them is about the largest crane in the world, fondly referred to as Herman the German. Four cranes were built during World War II by the Germans; three survived the Allied bombing. After the war, the U.S. took one of the remaining three, the Brits took one and the Russians took one. The U.S. had its crane in the Long Beach shipyards in California, the Canal Authority was looking for a large crane and it was offered the crane in Long Beach for $1.00. It was brought to Panama, rebuilt and is now in use at the canal. 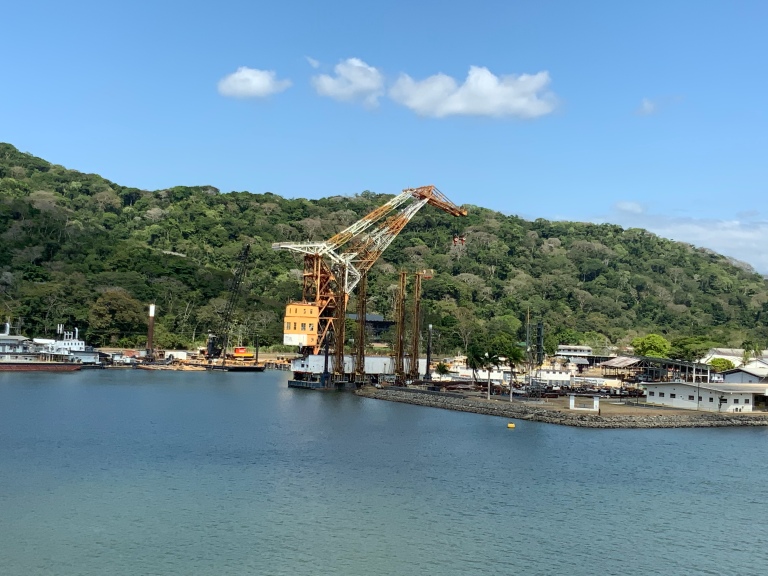 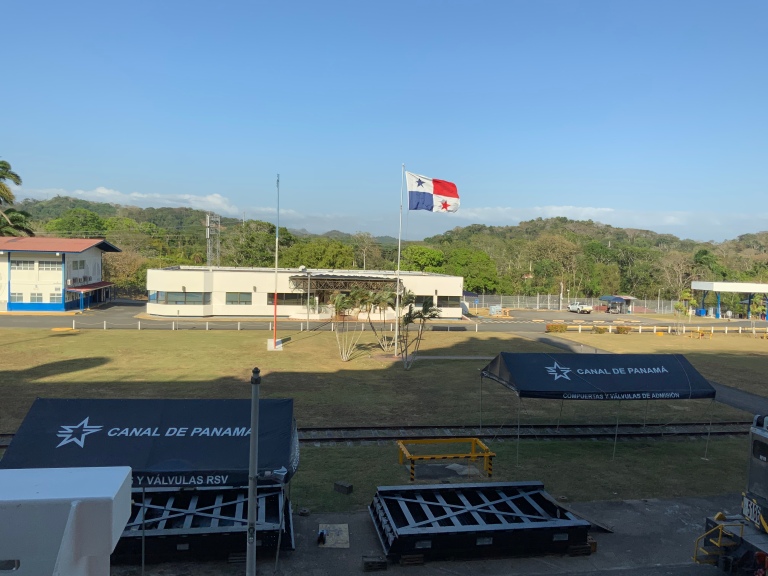 It’s now 4:15 pm and the ship has almost completed the transit through the last set of locks. Soon we will cruise by Panama City and sail out into the Pacific Ocean on our way to Costa Rica. This is our third time in the Canal and second full transit; it’s something, like the pyramids, awe inspiring in its magnitude and something we will not tire of seeing and experiencing.