Since leaving Port Kelang, our ship has been cruising through the Strait of Malacca. My heading on the blog yesterday was a typo – not Port Leland should be Port Kelang. My thumbs have become rusty when using my phone to do blog entries while we are in ports. Usually I’m using my iPad on the ship, must easier.

Additional thoughts from yesterday’s tour. Malaysia is a country that is transforming to be more and more modern. Their diversity of the Malay, Chinese and Tamil Indian peoples make the Malaysian culture very rich and fascinating. If you were traveling to Thailand, you could easily visit Malaysia on the way to Singapore by driving on their new toll road. It is only 847 kilometers from the border of Thailand to Singapore – breakfast in Thailand, lunch in Kuala Lumpur and dinner in Singapore.

Malaysia is 65% Muslim religion; however, they do not require all of the dress-code which makes the country more modern thinking. We hope this will continue after the government leadership change next year.

There are several areas within each of these Southeast Asian countries that are UNESCO World Heritage sites so if you ever travel here – it need not be only about the major cities. Although when you are on a cruise, you are able to visit all the major cities and some near by places, like the Batu Caves. If we were vacationing for more than a day, we would have spent more time outside the city exploring because the cities are now just like anywhere else in the world. Yes, the architecture is amazing to see; yet, the real people of the country are out in THE country. Happy to have had the opportunity to visit this area of the world again. Here’s a peek at the two towers and telecommunication tower in Kuala Lumpur out our bus window as we merge on to the toll road. 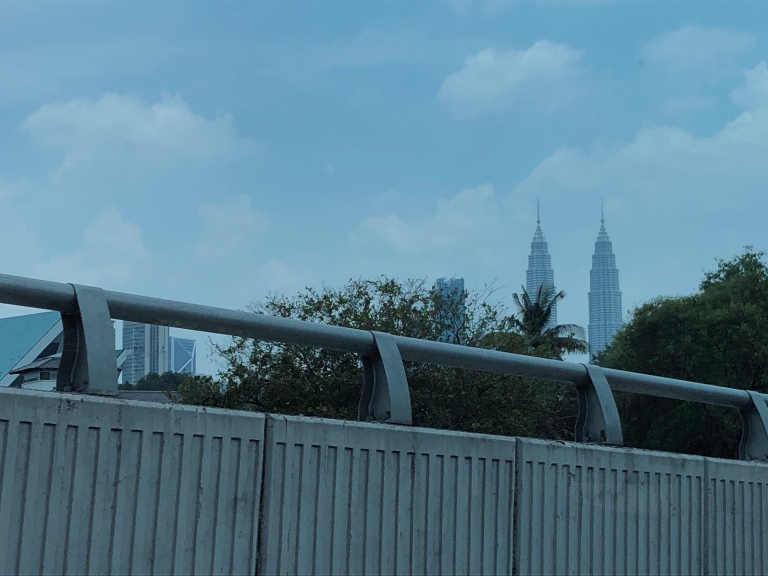 Back to Singapore for a moment. Sometimes we rush around so fast, we miss out on what’s missing, the so-called “Book of Void.” In thinking and talking about Singapore, we re-noticed the missing scooters and motorcycles on the streets. Are they banned, at least downtown? Anyway, it was nice to be away from the constant gnat-like presence of the two-wheelers. And it was nice that Malaysia must also have ‘banned’ them because they were noticeably absent unlike Vietnam.

Since we will be at sea for three days, the lectures start again with some new speakers. That will be our next post – the lecture series LOL