Two more days at sea and this time a bit rougher. The swells are around 5 meters and rolling all day and night for the past two days. Let’s talk about how great our balance is from all the ship’s movements! And at night, the sea rocks you to sleep :-). The temperature is finally in the 70’s allows everyone to start spending time outdoors again.

Christopher Kelly’s lectures have been filled with tons of historical information about all sorts of people and places. His book “American Invades” is a US version of a book written by Stuart Laycock about Britian’s history called “All the Countries We’ve Ever Invaded.” In the case of Britain, they have invaded all 196 countries in the world at one time or another. Stuart Laycock worked with Christopher Kelly to write the American version; starting with the definition of invaded as “Americans fighting abroad.” The book describes for each country where/when some USA person fought in a war or conflict. It includes all but three countries going back to just before the American Revolution. The three countries not included: Andorra, Lichtenstein and Bhutan – surprised me.

His next lecture was about the Hawaiian islands invasion starting with the Polynesian people of 1500 years ago right up to Pearl Harbor and, also March 1, 1942, when a pair of Japanese planes attempted to attach Pearl Harbor again but were shot down.

The other lectures I attended were about our future ports after Hawaii – Apia, Samoa and Nuku’olofa, Tonga. A person on Apia was described as the basis for Bloody Mary in South Pacific by John Michener in his book Hawaii. And Robert Louis Stevenson spent the last four years of his life on Tonga. More to come when we visit these places.

Other events: a lovely dinner at The Verandah with a person (who lives in Sarasota) and her friend (who lives near London) also on this ship doing the world cruise; a concert interrupted by another medial emergency

and afternoon classical concert. I’ve finally finished the book I’ve been reading and Steve is almost done with his second book.

Somehow it is Sunday already; almost 3 weeks on the ship and we have the opportunity to attend an interdenominational (Protestant) church service led by the Deputy Master, with music by one of the jazz pianists. Hymns today include: “Praise the Lord, Ye Heavens Adore Him,” “Who Would True Valor See” and of course ending with “Eternal Father Strong to Save.” Some of the voices in the crowd are powerful! They are probably part of the volunteer choir that will be serenading us in around 10 days.

Tonight our dress is ‘Smart Attire.’ This makes for easy dressing as the ship’s movement makes walking in heels a challenge! Steve is always looking dapper with his bow ties! 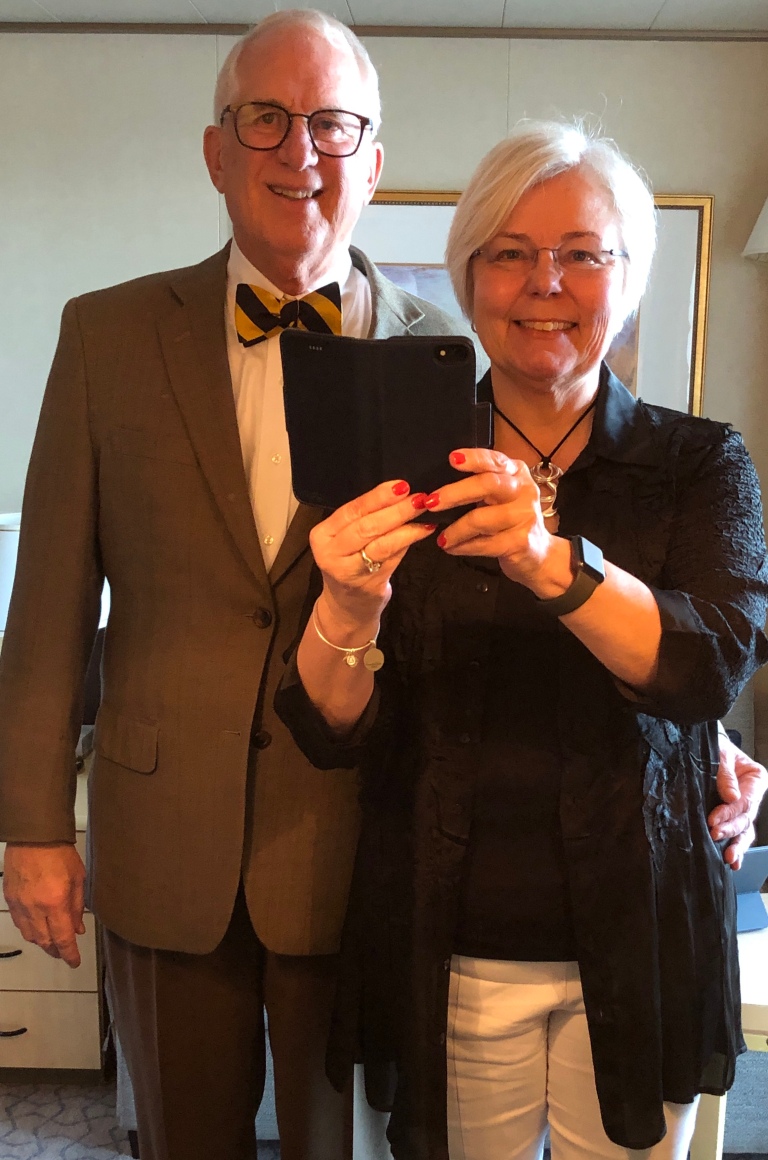