Our ship has sailed away from Chan My yesterday at 5:30 PM and is sailing down the coast of Vietnam. Now two days at sea as we head towards Malaysia and our next port, Singapore. The South China Sea is very calm – no winds to stir up waves over a long fetch.

We are back to our lectures, picture archiving and editing, reading and catching up on the blog. This morning, posting Hue blog, the internet was fast and I was amazed! Now I’m thinking the Australian’s were the cause of slow internet! Of course, day two at sea, the internet is slow again so who knows?? Many who boarded the ship in Sydney and Brisbane disembarked in Hong Kong. Then 200 more people will disembark in Singapore and the ship will be back to full with new passengers arriving. It’s almost like season in Sarasota with vacationers and snow birds coming and going at different times from October to May.

We really enjoyed Hue, Vietnam and took way too many pictures so we shared those that seemed to tell the story. A funny thing – we bought some incense and discovered it was quite strong. It woke me up with the smell last night LOL. Thank goodness for ziploc bags.

Look closely at this picture can you identify all the places incense is being burned? Incense is a big deal in these temples! The smoke can be overpowering, let alone the smell.

Yesterday we heard about Port Kelang – the gateway to Kuala Lumpur, Batu Caves, Putrajaya and Shah Alam. We visit Singapore first – then – the Batu Caves.

Lecturer, Chris Frame writes and maintains a website all about Cunard. He spoke about all the early ships of Cunard. Basically, Samuel Cunard an entrepreneur living in Halifax competed to get the mail service between North America and England. He was able to secure a slot in Boston Harbor for his shipping service. From this start, the company discovered passengers wanted to get back and forth to Europe. This resulted in the building of passenger ships, bigger and faster. Competition soon pursued Cunard. Yes, their ships were always made available for military transport during the various wars. An amazing company still surviving as a brand (now owned by Carnival). The second lecture was all about the more current passenger ships, starting with the Queens Elizabeth and Mary and a whole session just on Queen Elizabeth 2 retired after Carnival bought Cunard. However, it was Carnival that built the ships of today – Queen Mary 2, Queen Victoria and Queen Elizabeth. In 2022 there will be a new ship launched – yet to be named.

Some interesting facts about the first Queen names ships:

Queen Mary still holds the record for the most soldiers/passengers transited across the Atlantic – 16,082!

The current Queen Elizabeth saw all the ships named after a queen launched.

The Queen Mary happened to be in New York City when WW2 started. The Queen Elizabeth was finished being built and was waiting to go to Southampton to be furnished. Instead, they sent the ship to New York with no one knowing because the Germans were already in the waters off England. The ship made it into New York’s harbor even though it had never been through its full build sea trials. New York lighthouse master called it the grey ghost because even they did not know it would be coming through.

The Queen Elizabeth at 83,000 tons, 1,030 feet long, was the largest ship in the world until 1996 when Carnival cruise ships came and were bigger and arguably better.

The Queen Mary and Queen Elizabeth ships were kept in ‘war service’ for two years, after the war transporting war brides and reconstruction troops across.

The Queen Mary ship beat out the Normandie (a French ship) in the speed record – 4 days across the Atlantic – and kept the record for 15 years.

Where are they now? Queen Mary is in Long Beach, California and Queen Elizabeth caught fire and sunk in the Hong Kong Victoria Harbor.

Queen Elizabeth 2 has so many facts, she would need her own blog post!

We are looking forward to sailing in to New York Harbor on Queen Mary 2 in May!

The second lecturer is Keith Hockton. He is a historian and spoke about ‘The British East India Company – 1600 to 1858.’ This company changed the world – really. The individuals involved early on under Queen Elizabeth’s direction (pillage for me and give me 50%) were quite the group of rogue characters – Sir Francis Drake, Sir Walter Raleigh, Sir James Lancaster, Captain Nathaniel Colthrope and many others. Queen Elizabeth called Sir Francis Drake “My Pirate.” Thomas Pitt – who discovered a 400 carat diamond and Sir Robert Clive who was sent to India said “I stand astonished at my own moderation.” This was after Clive received 350 million pounds from a Raja for assisting with his men to fight in a battle for the Raja. By 1800 the British East India Company had an army twice the size of the British Army. In 1858 Queen Victoria took control of the company ending it’s taking over the world period – of course, she owned a lot of the shares – 100 Billion pounds worth.

His next lecture was about the Malaya Wars. I really didn’t know much about this history at all. The British were all aware because Malaya was one of their colonies.

An afternoon classical concert with Jennifer Watson on saxophone and Martin Jacoby on piano. We enjoyed the performance. 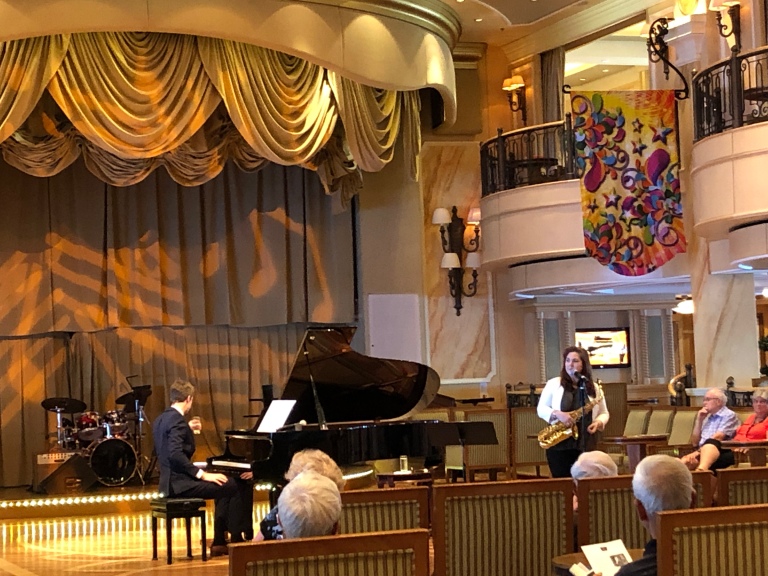 At dinner, a new couple boarded in Hong Kong. Each night there has been a person (who we will call a man servant) reading the menu to this Japanese couple seated only a table away from us. It is rather strange since the menu is in Japanese and we certainly believe these older people can read. This must be a ‘Crazy Rich Asian’ couple who have a personal servant travel with them to read their menu to them. This begs the question: “Why are they eating in our “steerage-level” dining room?

And then there is the other couple, we want to comment on, who come at 6:42 PM every night even though the dinner seating is for 6 PM. What do they not get about arriving on time and that this isn’t anytime dining? Yes, they supposedly have been spoken to but still persist on arriving at 6:42 PM. We can set our watch by them.

Life on a cruise ship…..tomorrow Singapore.